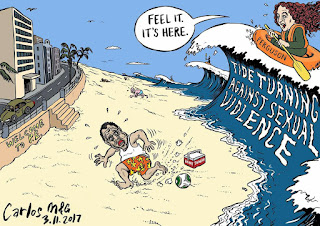 It was amazing to have you on the phone a couple of times and left me thinking about how hard, traumatic and painful this must be for you.

I don’t know the history of you finding out about Jennifer’s rape -   but it must be some story itself and I wondered if  men who are witness to the abuse of other men feel  betrayed by their fellow men with resultant anger and fury?

I have been thinking of you a lot - not sure why – thinking of what it is like to be witness something as dramatic and personal as this- being so close to the internal dimensions of this revelation and Jens extraordinary multi-dimensional response to this - her huge humanity in reaching out to people and us to her; her incredible writing on facebook – the outpouring of the years of silence and trauma, both as relief and as testament to this terrible abuse. So this is why I write to you to understand how you are in all of this?

Are you sometimes worried about Jen and her potential vulnerability? I think she has won the day actually and slaughtered this man’s psyche…but look forward to hearing about her strategy.

She is in good hands. Never has there been a better time to take this on as our whole nation is decimated by fractionalism and corruption - the truth in every way must come out.  Jen will do this in her way and for all abused women who will stand with her.

So Anders thinking of you too and if you want to call or write I am right here. What an incredible and perfect partner Jen found for herself... yes it’s you and well recognised.

Thank you ever so much for your letter. It was what I needed right now, godsent…

You’re spot on of course; It has been quite a ride; indeed, it still is! The tsunami is causing all kinds of storms on the inside as well.

But when you write "how hard and traumatic and painful this must be for you", I feel I need to clarify. Yes, it has been all of that and more! But also so much release and power and… LOVE. It probably resembles birth pangs more than anything else and I cannot teach you much about that. In the centre of my heart I have had this great peace all the time and the feeling that we are riding a wave that has been waiting to hit the shores since Abraham and the other patriarchs laid down the markers for our present culture. And now we prepare for its last rites. What an exciting place to be! What a wonderful time to live!

I see so many similarities between the SA ethnic struggle of the past and todays gender struggle. I did not know why it hit me, a young white male in Sweden in the 70's, with such a force that time. It caused me to put aside all other possible purposes and priorities in my life and fully engage myself in the black man’s struggle on the other side of the planet... I am today more aware of all the projections and pseudo-stuff enmeshed in that kind of an engagement, and I want to share that with you later, but I tell you now; there was nothing pseudo in what I felt when Mandela strode out of that prison! It still brings tears to my eyes thinking about it, it was me walking out of that prison, it was my liberation and it took on the most physical of appearances; I was healed from many years of sickness, my heart and eyes opened, my creativity flourished and I could in its wake receive Jennifer as life partner with whom I now share this extraordinary life. When I as a white took on a black cause I was blessed, redeemed and delivered (sorry for all these lofty spiritual terms, but I cannot look anywhere else to try to explain it) in a way I could never have imagined. I believe that when I as a man take on the women's cause it is the same. I realise that this is a story that also is extremely important to share. How can we make the fearful men, who think they are up for castration, realise the blessings of women's lib?  Or rather - make that: How can I make the fearful man in me, who thinks he is up for castration, realise the blessings of women's lib? Addressing that question could be my small contribution in the wake of this wave. That's why I get moved by your concerns about my wellbeing. Thank you, I am just fine, but I would love to deliberate a bit on that answer...

Naturally I have felt that my sole role in this passage has been to try to support Jennifer to the best of my ability. But have I ever been strengthened by her strength? Wow, even I am surprised to see how she is handling all of this! Moving from heart and gut straight out, (sometimes without taking the detour via the mind where fears could be lurking), she is wielding the female weapons in a way that male defences have no plan of battle to counter with. They are left flabbergasted and dumb. But of course, I also see her vulnerabilities, as they are also mine. And I try to be there as much as I am able. In the end, there is also the very down-to-earth realisation, that there will be battlegrounds, strongholds of the embattled patriarchy, where victories for our cause will be very hard, if not to say impossible to win, as they belong to tomorrow's struggle. All we can do is to try to keep our weapons - again I am speaking spiritually here - as shiny and functional as possible for today's battle.

So once again, thanks for asking how I'm coping; there is so much that I would love to share, and I would like to return to the question later; but right now Hanna needs to be taken to the station; in between all the big waves crashing in there's always - and what a blessing it is - the mundane chores that need looking after, that is what gives the days a beautiful feeling of purpose. It has been lovely to witness Jennifer riding these waves, coping with the small and the big, in a beautiful dance with elements seeming much more powerful than we are. But they are not; as much as we are riding the tsunami waves, we are actually the makers of them and there is a great peace in that awareness.

So, signing off here, with a feeling that there is a lot more to express, but thanks for the thought that got me writing...

Greetings to your man, would love to hear from him as well…

From Sweden with love,