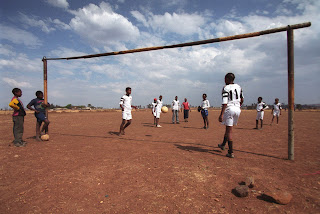 I have just watched my most beautiful World Cup Game.

I have not been too prone on giving match commentaries, as they feel too ephemeral even for a blog, but this one I have to make an exception for.

After too much time in front of FIFA playstation I jammed Gabriel and the boys into the Volvo, 9 of us in all, and drove out to Rhodes Park, one of these old central Johannesburg parks that still have not gotten a new name. It needs a facelift as well, the dry winterfields left pretty much deserted apart from a flock o doves trying to scrape out a seed or two.

After a while another expectant team showed up and we managed to get two eleven's.

But first we had to share the shoes. Most in the other team had no shoes at all so they played bare-foot. But some of them had, and in order to get the team ready and equipped they all shared shoes. Those with two gave one to the one's who had none, so when the team lined up most had at least one shoe on one of the feet.

Then we could start the game, and if football could be measured by the joy it is giving all its participants this one was unmatched.

Competetive? Definately!
Well executed? Partly!
Fun? The laughters rolled across the field as much as the ball, with as much laughters caused by your own mistakes as by your opponent's.

Sitting on the side-line due to a bad cold, I could not help but feeling that these are the kind of fields all over the world that will foster the new world players. The Beautiful game...

Everyone One.
English Football Integration