The home of the homeless

August 30, 2011
We're living in the periphery. You take the subway to the last stop, you walk to the last house in the suburb before...  No wait, there is still one more house before the end of civilisation.

The home of the homeless. 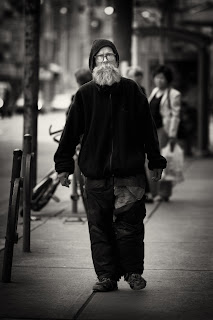 How utterly appropriate that it is placed where it is. It could not be anywhere else. It actually exists only because it is where it is. On the edge. On earth as it is in our minds.

As I sit at my desk I see the bent characters walk out to their "home". There is no way you cannot tell who is who. Basically people walking by fall into two categories; the one's who walk slowly and seemingly without purpose out to the periphery. Or the one's who with a spring in their step walk towards the centre. Oh well, then you of course also have the joggers, who run past the home of the homeless out into the woods to gather more pace and stamina in order to be able to run the rat-race into the centre.

I remember a story from my childhood Malung. Peo, one of the locals with a fondness for the bottle but also with a great reputation for puns, wanted to take a taxi out to his little shack in the "fäbod". But the taxi-drivers refused, having too many times taken him without proper payment. Peo however insisted and finally after some nagging one of the drivers capitulated, but not without resent, expressed through a rather wild and bumpy drive out on the small forest roads. Peo, holding on in the back seat, taps on the driver's shoulder and asks: "Hal du på å prov te kyr ifro mäg? - "Are you trying to drive away from me?"

We are all trying, but luckily there is that little tap on our shoulders... The more we try to see that we are not One, the more persistent the tap. Until we respond with anger, deportation of the nuisance to the periphery, along with all our excuses why we are not as them, followed by our own loss of humanity and having to fill the void with other things that we think we will find in the centre.

The fear of condemnation makes us condemn.

At my grandfather's and grandmother's wedding in the beginning of the last century a family picture was taken showing the families of the newlyweds. All the siblings are sparkling of happiness, donned in their finest clothes with faces shining like polished pots. One of them is Erik, one of my grandmother's youngest brothers. He is shining with the rest, and even if I look to detect something different in those smiling slanted eyes I cannot. He is all smiles, just like all of them.

Erik was the naughty one. A few years later at the division of his parents estate he swindled his siblings and ran away with the money, never to be heard of. Nor spoken of, I am not sure my father even knew  of his existence. Except for maybe that smiling face on the wedding picture. But one day, a lifetime later,  somebody from Stockholm social department calls my aunt - that tap on the shoulder - and says there is a funeral and they believe the deceased, Erik, could be a relative.

Erik was buried along with his name. Nobody came. Except my aunt, a priest and an organist.

I am looking out the window as I am sitting here in the periphery and I see an old man kicking up the paper with his worn out shoes.

He could be my great uncle.

Actually he is my great uncle.

"Are you trying to drive away from me?"

"No bro, I am not, no more, no more. How could I enjoy the ride without your company."
English Sociology