June 24, 2010
I am enjoying a peaceful morning in the Troyeville flat overlooking Ellis Park.

But peace is, as always in Johannesburg, a bit elusive. Underneath a winter-pale highveld a mountain of gold is stashed, giving this place its constant nervous vibe. Underneath my calm exterior quivers the excitement of all the action, all the people, all the energy I have encountered the last weeks.

I have been to eight games so far and I am enjoying every minute of it. I am taking my sons to the games as much as their school allows and it is optimal boys quality time. (All the schools of South Africa are out for the whole World Cup but the school in Swaziland where my boys go are only out one week.)

And it is with gratitude I acknowledge that I am rich when it comes to sons - in a true African fashion. During our time in the Peace of Music Centre here in Troyeville, (called the Biiig House by the children), I was known as “Paps” to all the children. And to my delight I notice now a few years later that the name stuck. So I am now busy taking all “my sons” to the games. It is hard work – but oh how rewarding!! 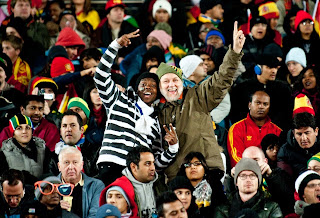 South Africa is out of the World Cup, earlier than any other host at previous Cups. But the country is proud of a team that has given them two fantastic games to remember, the opening cracker in Soweto and the victory in Bloemfontein over France. In between - and maybe also good to remember - was a game where the fear of losing triumphed over the joy of taking part.

Most of the 32 participating teams will end their tournament with a defeat. South Africa, together with the winner of the final, ends with a triumph.

The hope and focus of this country will now shift to the remaining African teams and at the time of writing only Ghana is still in, with a theoretical possibility for Ivory Coast still to go through. The hope of African success in this Cup, a hope certainly upheld not only by Africans but also by many in the world football fraternity at large, is dangling in a thin thread.

There has been a lot of speculation about a possible African break-through in world football - and why it has not come already. Well, a lot of it can surely be attributed to “political” reasons; just consider the fact that European teams have only won the Cup when it has been playing on home turf in Europe. So far no African team has had the advantage to do that. This historical imbalance will take long to rectify – Europe has hosted the cup 10 times and the only time a European team did not win was in Sweden 1958.

But – be the change you want to see - there are of course ample reasons to be found within the football of Africa as well.

Ghana is right now Africa’s black star of hope on the horizon. They are the reigning world champions for the under 20’s and have the youngest team of all at the World Cup with quite a few players who were part of that historical victory.

They played Brazil in the final, got a red card already in the 37th minute, but managed to hold on through the whole game including extra time and won finally on penalties.

African teams have seldom been inferior to the top teams in technical skills or physical play. The seeming lack has been the tactical implementations and the confidence, which of course partly can be related to the fact that they have perpetually been the away team in the big tournaments. But this time, on African soil in Egypt, the 10 young Ghanaians could not have won if it hadn’t been for a superior display of tactical skills compared to the Brazilians. It felt like a break-through.

I can’t refrain from drawing a parallel to the rise of the East African long distance running hegemony. When Abebe Bikila ran barefoot to the marathon gold at the Olympics in Rome 1960 no one could but see that here was an uncut diamond, and that there would probably be a lot more of that, undiscovered and unrefined, in the mountains of East Africa. It took time to exploit and develop that resource however, but now anything but three runners from East Africa topping the events from 3000 m and upwards in the big competitions is a sensation.

But the road between Bikila and the East African supremacy of today was paved with a lot of races where talented East African runners failed due to bad tactics and - a lack of tradition of winning. Nothing begets victory more than victory itself. And today the combination of East African running talent with their outstanding tactical understanding and implementation, some of it learned from European coaches, seem just impossible to beat.

So could the Ghanaian morning star herald the dawn of a West-African Football supremacy? Well, at least not in any foreseeable future. But the Ghanaian under-20 win over the Brazilians surely felt like a watershed of sorts. The confidence and faith in what is possible is growing. The young ones are throwing away the psychological shackles of the past preparing for a different future.

“Time’s longer than rope” as a West Indian proverb so eloquently puts it.
English Football