June 16, 2010
Johannesburg is slowly waking up. A suggestion of frost is being wiped off from the rooftops in front of me as the sun starts its day’s work. But the streets are still unusually quiet.

It is June 16, a holyday and a holy day in the South African calender. The day of the youth; the day of the bafana and the banyana.

Johannesburg itself is an incredibly young city. The world’s biggest gold deposit was found here in 1886 and rapidly changed the course of history. Fortune-seekers from all over the world moved in and 10 years later Johannesburg had outgrown Cape Town as the biggest city in the country. But everyone did not come voluntarily. In order to satisfy the great need for labour a “hut tax” of 14 shillings a hut was imposed on the natives by the British colonists, forcing the African population into the monetary economy.

The pattern was not new and Darfur is a sorry reminder for the world community that it is still continuing: whenever and wherever riches are found on the continent of Africa it means poverty and bondage for the people living there.

Apartheid followed, as a kind of moral justification for the exploitation. Behind the mine dumps of Johannesburg a human dump of labour was created: Soweto, the south-western townships. Cycles of repression continued until one day, June 16 1976, something spontaneously snapped.

The youth took to the streets, the sparkle being the implementation of Afrikaans as a means of instruction in the schools, a language not only foreign to the youth but to their teachers as well. The state replied with the only language it understood, and after the wave of violence had subsided 600 young black South Africans around the country had been brutally killed in the dusty streets of the townships. 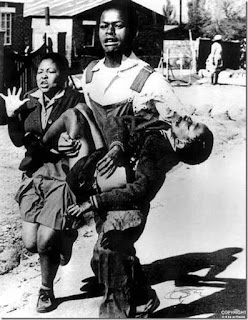 The road to freedom was still a long one but June 16 was the point of no return and indeed is a day to reverently celebrate.

A few years ago I sat in a café on an international airport wearily overhearing a conversation between two well-travelled businessmen at the table next to mine. They were bemoaning the state of the world, listlessly listing examples of hopelessness; Middle East, The Balkan, Latin-america, Africa… But then one of them lighted up: “But there is one place that’s really happening, Soweto in South Africa…!” And he got all excited about the transformation of Soweto.

The journey from being the human dump of the world to being the one example of hope for the world is such a grand story. The first time I travelled to Soweto, two years after the uprising, it’s entrance was guarded by a military post, some of its rusty towers still standing, as a reminder of how short this history is. Today when I together with the whole world approach Soweto I am greeted by the towering calabash of Soccer City, the African bowl of friendship and spirit of community.


A little footnote on today’s opponent Uruguay: did you know this big little football-country is with two gold medals and three million inhabitants topping the list of medals per inhabitants?
Sweden is second with one silver and two bronze-medals on 9 million, followed by Hungary.
English Football Peace & Reconciliation Sociology