The fall of Infallibility.

June 30, 2010
What a day it was. A day I’ve longed for and anticipated. Maybe not the day Infallibility fell altogether, but it got some lethal blows I doubt it will fully recover from.

The unlucky Irish got robbed of a place in the World Cup through a goal preceded by Henry of France handling the ball three times.

It was watched by millions of viewers all over the world in slow motion. But not seen by the Swedish referee Hansson who is only allowed his limited perspective, not the view everyone else benefits from. Yet he is supposed to be the all-seeing, all-knowing, all-objective.

I was quite convinced that the French would not be able to enjoy a tournament that everyone knew they had cheated to qualify for. I did not know how right I would be though. But credit to Henry who actually wanted the Irish game to be replayed.

No one benefits from this order.

FIFA? Hardly, they had to do a lot of damage repair, holding the fort and riding their high horses.

But reality was ready to pounce again. I was just waiting for it, it was bound to come and it came with a quick double-blow that has the towers of power still reeling.

First the highly charged England – Germany game; Lampard’s shot ricochets from the crossbar, the ball bounces down and out.

But was it in? I confess I could not say with certainty in that split second, but in the replay - “Oh, my God”, as the referee according to BBC panted when he saw it at interval - the ball was half a meter inside! 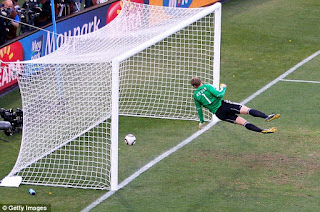 Instead of 2-2, the goal was disallowed and the English in their attempt to push to get level made themselves vulnerable at the back and was clinically beaten by the Germans twice, 4-1.

(I am aware of that these stories need not be retold to the football fans, but in case there are readers of these lines who are not, we have to go through it in order to get to the bottom-line.)

While waiting for Argentina – Mexico a couple of hours later, another game laden with historical significance, there was a perceivable shift among blog-authorities in the football-world. Goal-cameras…? Yes maybe...

And in that game the discrepancies became even clearer. On the screens at the World Cup football stadiums we do not get the same edit as the TV-viewers around the world. We get fewer replays. Instead of watching detailed slow-mo’s of contested decisions we are seeing a birds-eye view of the whole stadium. All for the sake of upholding the referee’s authority on the field.

But this time something went horribly wrong. Tevez scored after a messy situation. My first thought was that the goalkeeper had been fouled, but the goal was allowed. But then we could all see the replay, and I mean all, because this replay by some fluke was also shown in the stadium!

And we could all see, with descriptive graphics included, that Tevez was at least 3 meters offside when he received the Messi pass! The Mexicans saw it and naturally mobbed the referee. The Argentineans saw it and wanted the ref’s decision to stand. Tevez himself just walked up to the middle circle and wanted the game to carry on. I presume the Italian ref Rosetti himself saw it, putting him in this almost farcical situation, although he would be excused for not seeing that side of it there and then;

Everyone on the field knew it was offside, everyone in the stadium knew it, everyone on the planet knew it and Rosetti had to make the decision of his refereeing career. Weather or not he had seen the evidence on the stadium screen he could not rely on that as proof, as that - according to FIFA thinking - would undermine his own authority. He either had to go against what everyone saw was the truth and stick to his decision to allow the goal, or go against the holiest of his refereeing principles, the principle that is the basis for him being there.

In order to be a referee he had to choose the latter and allow the unjust goal.

And what is the principle?

Well, if you allow a bit of a travesty it is:

And if you want it a bit more seriously it is about authority and where to look for it. It is about the principle of infallibility.

The whole world had watched the contradictions unfold on the fields and in the blogs shortly after the writers weren’t only vying for the goal-cameras, they wanted the whole truth and nothing but it, with referees having access to what everyone else has in form of cameras and replays over the whole court.

Free the refs from their ivory towers, from their own prison of infallibility and let them join the fun with the rest of us! If you don’t want them to have access to technical devices to do their job as game-leaders why do you give them a whistle?

But now - really - why get so excited over a game, over some technicalities, and by the way everyone must surely be allowed to make a mistake?

Yes indeed, these are in themselves small and insignificant things, but as symbols they stand for something much bigger and definitely very significant.

We are living in the most exciting times of transition.
Our old authorities are being questioned and replaced.
Not only are our icons and altars replaced, their whole existence is questioned.
And it is not the new technical devices that are the harbingers of change as much as it is the change of mindset that is the creator of our new reality.

In the final analysis I think it is a question of where we look for God, whatever name we happen to attach to her. Even regardless of if we believe in him or not. The question is where do we look for that to which we attach value? Upwards, outwards or inwards? Where is the treasure, the final authority, the final reality?

We as mankind are still to a large extent looking for our authorities where we have found them in the past, in the top of the manmade hierarchies. And crowning it all, benevolently smiling, is definitely a god who is white, male and old.

The worshipers are still holding on, but as the effects of their idolatry become clear and the paradoxes manifest, a wonderful transition is happening where the preferences are slowly shifting. Ultimately it is a change not of our own making, but we will have to learn to read the new map and understand the landscape a little better in order to avoid the pain of worshiping gods that aren’t delivering the goods anymore.

And what does football have to do with this?

Everything. It is as everything else a mirror of everything else. But being the global force that it is with root-threads spreading down to virtually every single village on the planet it reflects the state of our planet better than most other indicators.

What happened on the fields the other night was in a beautiful way laying bare the need for this transition. A new way of seeing has emerged which empowers the many and forces the few, the former authorities to withdraw their claims of our allegiances. The false gods we have worshiped proved to have no more power than what we have given them. The towers of our illusions will fall. And we are not talking about predictions here; we are talking about the present reality. All institutions feel it; educational, business, governmental, military, sports, spiritual. Can you feel it, it is here?

The spiritual institutions, which after all are in the business of erecting altars and promoting icons, feel it more than others because it hits right at their core activity.

Seeing Rosetti’s dilemma on the field I couldn’t help but seeing a mirror of what the church is facing, the Roman Catholic Church in particular.

Everyone can see that something horribly wrong is going on here. Something that totally misses the intentions as stipulated in the founding rules and regulations of the organisation. And yet the highest authority claims infallibility.

The dogma of papal infallibility has come about for the same reasons as the notion of the ref’s infallibility. It is all about claiming the authority needed to keep an organisation together. And there’s no point in judging it, there probably hasn’t been any better way of doing it and it has worked so-so, for now.

But a new day is dawning; a new generation is emerging with new eyes, seeing the emperor’s nakedness. And the old structures will not be able to stand in the new light. They will dissolve like morning mist over fields on a spring morning.

It is a day to celebrate for all of us, because we are all winners inasmuch as we withhold our offerings to the mute and deaf gods, as long as we stay away from the temples of hierarchy crumbling around us.

We are all winners: the Henrys and the Hanssons, the Rosettis and the Ratzingers. And the Irish will be lucky again – together with the French!

Indeed, what a day it has been!

So then, where is the treasure, the ultimate authority?
Heaven is within.

Can’t you feel it, it is here!
English Football Sociology Spirituality