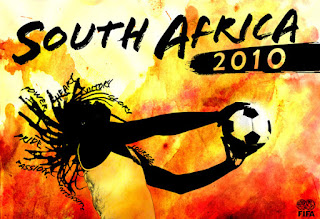 That’s what I need now…

I have just arrived in South-Africa for the Soccer World Cup and I tumble over my doorstep in Troyeville totally overwhelmed.

Arriving at the Joburg airport was a kind of a cultural shock in itself; SO many feelings, such joy, so many tears (of happiness…), such a feeling of almost disbelief at the fact that it is actually happening.

The feeling that this was a very different trip started already at the check-in gate in London. I laughed when I saw the queue. Almost exclusively men, but boyish and up-beat unlike many other airport queues of burdened bureaucrats. I came to sit next to one of the few ladies. At first it seemed that we didn’t have any language in common and after spending the whole long night silently stuffed side by side in the aircraft I noticed in the dawning light a white and lightblue striped shirt and I asked: “Argentina?” “Si, si!”
Having thus found our common language we spoke football intensively and happily for the rest of the trip. And we really communicated, expressing innermost feelings and developing a profound sense of human fellowship despite a real lack of a common verbal language. Football is a language more than anything else, a means to communicate over otherwise incommunicable barriers.

The arrival hall turned into a colourful stage for a world party! On my plane was a contingency of Mexican fans (who had travelled via Miami and London). They got out their trumpets, violins and tamboras, their sombreros and huge Aztec feathered headgear and started the fiesta as soon as they sat foot in the beloved country. And the South-Africans danced along, anticipating the opening game. When some Argentinean fans appeared the Mexicans quickly changed their chants from MÉ-HEE-CO to AR-GEN-TINA followed by an intra-latin dance.

Remembering a departure from South Africa almost 30 years earlier I had to quickly look away trying to conceal the tears streaming from my eyes.

It was a gloomy morning at the airport in Cape Town (Then named D.F. Malan airport after an apartheid prime minister.) I was leaving the country after working a year in Gugulethu and Athlone with music as a volunteer within the Lutheran Church. The place looked more - and certainly felt like - a military camp…

My choir, the Teenage Harmonies from Gugulethu, had gotten up before 5 o’clock in the morning and run out to the airport and were now ready to “sing me off”, dressed in their tracksuits. But half a second after they let their golden voices fill the departure hall, the guys in the uniforms rushed up to us with guns in hands, brutally stopping us from singing. “You can’t sing in here!” Knowing that our real crime wasn’t the singing but rather the being together, we trotted off silently, but still together, towards the door. Outside the singing started again, even louder, attracting the attention of the entire outdoors as well. But time moved and I couldn’t postpone the inevitable separation any longer. We stopped singing and walked into the departure hall again. Meanwhile my friend Monde had been nudging me for a while; “Let’s pray…”, but with time running out and still so many people to bid farewell I thought there must be better things to do. But he kept nudging me and just before the final call we formed a big circle right in front of the men with the guns and prayed loudly: “God, we pray that we soon will be united again in this beautiful country, free to sing wherever and whatever we want…”

A couple of years later I slipped into the country again, unnoticed I hoped, arriving in Cape Town on another flight than I was originally booked for. But when I stepped out into the arrival hall, what meets my eye if not some of the members of the choir, still in their tracksuites! But still silenced… As if they had waited there on the airport for this reunion, just like me, longingly on my side of the world, since the departure a few years back...

Hey guys, if anyone of you ever read this, I cannot start to explain how much your presence meant to me that time. The prayers had not been fully answered yet, the singing was still painfully lacking, but your steadfastness reassured me that it was just a matter of time until we would burst out in jubilation together again.

And now here I am at the airport with Mexican trumpets blasting away, with flags of all colours flying and peoples of all nations dancing in front of my eyes.