Listening to the soft voice

June 27, 2010
As the vuvuzelas now are being exported around the world their sound seem to abate a little here in SA – or is it just our ears that are getting numb?

And as the blasting sounds have entered into virtually every home in the world through the TV-screens the discussion is now reverberating around the world. 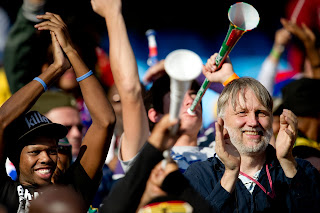 In one of the games in Bloemfontein an elderly white South African and a young black South African had seats next to each other behind me in the stadium. The black guy tooted his horn. The white man asked him for mercy. The black man replied with total certainty: “I can blow as much as I want” and carried on mooing.

I couldn’t help but smile; somehow being able to understand both views. This little dialogue could so easily be placed in a racial context in this country, but it is more than that; it is about cultural diversity and our need to embrace and celebrate it!

I wrote a little in my first blog on the subject why I so easily can understand and enjoy the black man’s response. It is about exercising your democratic rights and letting your voice be heard. And few countries have waited so long and so intensely for this. I don't think I need to quote the SA Freedom charter to motivate that stand?

But for a country to mature into a real democracy however, it also needs to learn to listen to the softer voices in its choir. That’s when democracy becomes not only nominal but a beautiful way of relating between people. And nominal democracy is of course always the opposite of the real thing. The only country in the World Cup incidentally with the word “Democracy” in its name is the country that lacks it totally; The Democratic Republic of Korea. Please offer your warm thoughts and your acts of solidarity to the brave guys in the North Korean team who are now returning to an unsure future in the country they have represented so valiantly. Returning athletes who have been “betraying” their country (like losing 7-0 to Portugal) have previously been known to spend long times in labour camps to restore their lack of ideological training...

I remember such a beautiful meeting with a teacher in a South-African township school in the eighties. She had lost her voice and could only whisper. But as she was the only breadwinner in a large extended household she had to go to school everyday and continue teaching in her big and usually quite noisy class. But a wonderful thing happened. The children, being quite small, answered back in the same way, whispering. So the whole class spent their days whispering in solidarity with the teacher.

The small ones intrinsically understand the need of communicating with the softer voice, because that is their own. It is the bigger ones that need to be reminded to listen to the soft voice that so easily is drowned in the cacophony of the world.

And using the softer voice did not put the kids back in their development and learning – it allowed the learning process to continue.

South Africa is in a new phase of its maturing democracy. The political leadership needs to listen to the people, not only using their new-won political platforms to uplift themselves and use them as megaphones.

Listening to the soft voice makes your own more credible. Just as walking that extra mile with your brother never sets you back on your own journey.

The Vuvuzelas make it harder for the players to communicate, the referee to be heard, the coach to coach, and ultimately the crowd to have a positive impact on the players and the game. So South Africa, for the beauty of the game and the vibrancy of our democracy; Let’s not only proclaim our new-gained liberties with fervour, but also listen to the smallest of voices, be it the voiceless teacher in the township or the old white man in the stands in Bloemfontein Stadium.